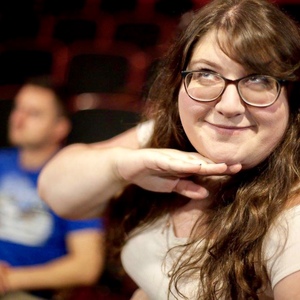 Hey there! My name is Katherine Lazarus and I'd love to coach your team!
I'm an improviser, actor, and sketch writer/director. I've been studying and performing improv since 2012. I started while living in London and then started taking classes in New York. I am an original and current member of The Armory's improv house team (She Blinded Me With Science, Supermodel UN, Parliament) and I am also the head writer for the Armory Sketch program. I also am the producer of The Pit's Super Free Monday's Indie Hour, which I have been doing since November of 2016.

I also have been teaching for a number of years specializing in Improv, sketch writing, and acting.

When it comes to coaching I want like to focus on team building and pushing past plateaus. Improvisers always hit peaks and valleys in their performance and training and I want to help you push yourself to grow everytime you rehearse or perform.
Coming from an acting background I hope to help you and your team find and embrace the emotional realities of your scenes to give them a deeper and more flushed out meaning, while also being amazing and funny. The more you feel it the better it is.