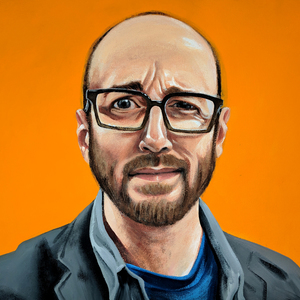 Host of Improv, Beat by Beat, and currently in Megaplex: The Improvised Movie and on the UCBLA Harold Team GHOST. Previously on UCBNY Harold team teams Fluffty, Sleuth, Coworkers, and Greg and the Lloyd teams Big Revival and Hotspur.

I am/was in the teams LD & The Scientist (performed the Krompf), Daring Nerd (performed the monoscene), The Macroscene (the original class, performed the Macroscene), Kick Touch, Baby Grand, Dumpster Tequila, and Hollywood, Kansas (musical improv), Fligflog (3-person monoscene), Sister Sex Wolf (montage), The Asylum (The Movie), and Blyleven (new form each show), plus others. I've been improvising since 2006.

I will correct any misconceptions about dinosaurs that come up in scenes.